Anne Dodds’ greenhouse is at Te Awaiti on the Wairarapa Coast. A visit to her garden is part of the coastal walk for many people.

What a season! Day after day this past summer, I would walk into my greenhouse and be amazed.

Never have I had a season with such high plant health and low pest burden. So what did I do to warrant such a season in the greenhouse this year?

I don’t believe it was any one thing but rather a combination of several practices. As I have often commented, biodynamic materials are not a magic bullet, but rather very effective tools to have in the tool kit, along with other sound organic management practices. A combination of the timely use of biodynamic
preparations (including cowpat pit), good compost, companion planting and biological control of pests formed the essence of organic management this year in my greenhouse.

The start of the process was the incorporation of well rotted bull kelp, dug in and mixed with good biodynamic compost. The use of sequential sprays of 500/501 twice in spring at moon opposition laid a good foundation, along with planting out and side-dressing with CPP. This year I also decided to try some companion planting with my tomatoes, and decided to have a go with carrots. The Rodale Institute book ‘Carrots Love Tomatoes’ must
have been named that for a reason, I thought. Now I think it is worded that way because it comes off the tongue better, because “tomatoes love carrots” doesn’t sound as good. The carrots didn’t do very well – they were a bit small – but I suspect the tomatoes did love them.

… biodynamic materials are not a magic bullet, but rather very elective tools to have in the tool kit, along with other sound organic management practices. “

The biggest contributor to the pest management was that I again used predators from Bioforce NZ. This season I used the pack that came with Encarsia formosa for whitefly, Aphidius colemani for aphid control, and dusky ladybirds. E. formosa is a parasitic wasp which lays its eggs in the third and fourth nymph stage of the whitefly (see diagram). Once the nymph has been parasitised, it turns black; shortly thereafter, the adult wasp hatches out. Aphidius is
another parasitic wasp. It lays its eggs in the adult aphid, and again, once parasitised, the aphid turns orange and then the Aphidius hatches and goes about its business. The dusky ladybird quite simply feeds on both the whitefly and aphid. I introduced these predators about a month after planting out, around the middle of September. I have used them before, but never with such success. I put down the difference to the fact that I also planted out alyssum, which is well known for attracting beneficial insects. The tiny white nectar-producing flowers allow the E. formosa and Aphidius
to feed as they go about controlling the pest population. It is also entirely possible that the alyssum attracted other predators such as hoverflies at the same time.

In the past I would need to reintroduce the predators a couple of times a season, but this time, as I was growing food (flowers) to nourish their little bodies, I had no increase in the pest population up until the beginning of June. Both aphids and whitefly were under control. By the middle of June, the aphids were getting up to a problem stage again. I put that down to the fact that possibly the Aphidius doesn’t like the cooler temperatures, as well as the fact that the eggplant and capsicum were by then under stress due to the lack of sun hours and warmth. I very carefully observed what was happening with these amazing little guys, and the most incredible thing is that they “farmed sustainably.” In other words, they did not destroy the entire population as we humans have tended to do; they actually maintained a small population so that they could maintain a lifestyle that they seemed to enjoy in my little Garden of Eden greenhouse.

The predator population needs to be well-established in order to work with the pests. If you want to try this method of control, do not leave the introduction too late.

With the pests under control, the plants were not stressed, and therefore there was no disease. So often the moulds and fungal diseases are able to get a foothold due to the honeydew secreted from the whitefly – but no whitefly, no honeydew. No honeydew, no disease. A couple of times this season I did need to do a spray of Bt (Bacillus thuringiensis) to control caterpillars (unsure of the variety, but they ate the leaves and left their unwelcome deposits). Still, this comes under the umbrella of biological control. It is very important to keep up with regular observation of what is happening to your plants. If you see early evidence of a problem such as caterpillars, then the remedy can be simple and e!ective. Too often, if a problem is not spotted early on, it can become very difficult to manage. For instance, if the aphid or whitefly population gets too big, and then you introduce the predators, it will not be successful. The predator population needs to be well established in order to work with the pests. If you want to try this method of control, do not leave the introduction too late; you will be behind the eight ball and that can mean only trouble.

There is one other factor that I would like to acknowledge,
and that is the love that I have of my greenhouse garden space as I walk in every day to tend and nurture my plants. My heart goes out with thanks as I harvest the bounty; I am fully aware that I had considerable help from the unseen forces of the elementals. Now all I have to do is to repeat what I have done next season and hope that I get the same results. 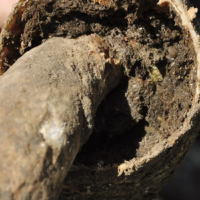 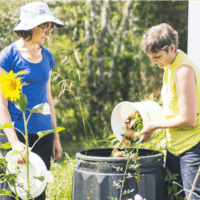