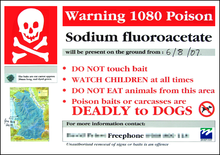 Recently, we’ve been asked about the Association’s stance in relation to the use of 1080, particularly where its application could affect biodynamic producers and/or threaten Demeter certification.

The Association doesn’t campaign against any pesticides. We focus on showing and supporting people to farm in a healthy way. And our view is that any farmer who doesn’t want pesticides coming onto their land from outside should have the right to be free of them without being financially disadvantaged by costs that should be borne by others, such as DOC.

In the case of organisations like regional councils or TB Free NZ wanting to come onto a farmer’s land to poison pests, we’ve long said they should give the farmer the money they would spend and allow the farmer to do the work themselves by non-chemical means. We’d accept that there could be monitoring to ensure the same standard of kill is achieved.

We are aware of at least one farm in New Zealand where this method has been successfully employed.

Impacts of pesticides on Demeter certification

The Association also operates the Demeter certification scheme. Again, this is not a system for campaigning against pesticides, but a way of highlighting produce grown in a biodynamic, healthy way that avoids the use of chemical pest control.

Pesticides are widely used in New Zealand agriculture, and it’s against this background that Demeter biodynamic production must currently take place. Demeter and other organic farmers have to be continually vigilant about the possibility of unwanted pesticides entering their land through accidents or the careless activities of pesticide users.

The Demeter system requires regular and ongoing identification of any threats and specific measures to combat them. Sometimes, unfortunately, this requires some land or a specific crop to be taken out of Demeter certification, with the result that the Demeter grower is penalised for the actions of others. In a perfect world this would not happen, and any costs would be borne by the transgressor – in fact, in such a world certification wouldn’t be necessary and those who wished to use chemicals would be the ones more closely scrutinised.

The reality of pesticide-free farming in NZ

However, the current situation is that Demeter and other organic growers have to take their own precautionary measures as the only practical response. The Demeter system therefore requires specific information to be gathered in every case, and appropriate measures to be taken, so it can protect the public while not making unwarranted assumptions that nearby chemical use is encroaching on Demeter production. Such assumptions applied nationally could lead to there being no organic farming in New Zealand.

As it is, some crops are very difficult to produce. Organic honey, for example, can be produced only where it is clear that the nearest pesticides are outside the normal nectar and pollen harvesting range of bees. This means that very many growers who have beehives on their properties pollinating their fruit trees cannot produce organic honey because of neighbouring activities.

Co-existence of Demeter production with farming that uses chemicals as a matter of course requires considerable commitment as well as constant vigilance and community support. We urge everyone who values such production methods and wants to see the spread of biodynamic (or other organic) farming, to support it by the way you buy your food.

Buy Demeter or other certified organic produce in preference to all other. Every dollar spent this way will support a grower who is committed to doing without pesticides in their day-to-day farming.