Six years ago, our school grounds expanded with the purchase of the neighbouring property – a commercial four-story building surrounded by asphalt car parking areas. On two sides of the newly acquired grounds, edging the building and edging the street, were very sorry, pale, baked, unloved and lifeless strips of gardens supported by a couple of Acer negundo maple trees, a eucalypt and that thorny stalwart, the Eleagnus hedge.

On the third side sat an additional very large asphalt carpark. A contracted company ripped up the asphalt for us. On half the area, topsoil was smoothed out and grass seed blasted on – and presto, the existing playing field had been extended.

On the remaining half of the area, a linking pathway was laid to join together the two school areas, with one side flanked by two long gardens which surrounded new seating areas for high school students.

In Term 1, each class had one gardening period per week. We divided each class into three groups. One group began breaking through the rock hard ground using mattocks and spading forks; it was tough going. The second group followed behind, delivering wheelbarrow-loads of our biodynamic compost. Luckily we make lots.

The third group followed behind, digging the compost in as best they could.

Four weeks and four gardening periods later, the ground was ready enough to receive large seeds, so we sowed broad beans and lupin thickly as the first of many green crops. An irrigation system had been put in earlier, so as the plants grew they were watered regularly.

Each week, the class children happily stirred and sprinkled cow pat pit (CPP), and the green crop grew. Once the plants reached just above knee height and before the crops began flowering, the children set to chopping and digging the green crop back into the soil. This added valuable organic matter to the soil, and it was at this time that we found the first scattering of worms. These worms were fiercely guarded by a group of children, and we needed to dig very carefully around them.

The gardens and new field received their first taste of Preparation 500 just after the Autumn Equinox, spread by one of the Class 3 groups.

Here in Hawke’s Bay, we never like to leave our soil naked and exposed to the elements, so we sprinkled a very light covering of lawn clippings over the bare ground until the following week’s gardening time. That next week, we sowed another green crop. This time we sowed lupins, oats and mustard, with two patches set aside where we sowed peas. As we prepared the ground for the seeds, the effect of the Preparation 500 was visible; our worms had greatly multiplied and were appearing in numbers right throughout the gardens.

Next came Terms 2 and 3. Cuttings of Rosmarinus officinalis (rosemary) were made; we dipped and stirred these in CPP
to encourage root growth, and placed the cuttings directly into the garden, to grow into hedges which would shelter the garden from southerly winds, and to give the seating areas a cosier feel. A few cuttings of Hebe speciosa ‘Dobbie’ were also put in amongst the green crop along the gardens for more permanent plantings, while still leaving areas for future crops.

Meanwhile, as the plants grew, we applied CPP weekly, and off we went to make more biodynamic composts. Cow horns were filled with fresh cow manure and buried for Preparation 500. We also did some tree pasting, with children pasting their favourite trees in the school grounds. Leaving the peas alone to produce pods for the children to eat, we chopped the green crop and cut it back into the soil. By now the digging was becoming easier. Another application of Preparation 500 was stirred and spread out by the other Class 3 before the Spring Equinox.

The following week, we dug more compost into the soil, and then scattered a light blanket of lawn clippings to cover the soil for the holidays.

At the beginning of Term 4, the peas were ready, and the children gobbled them up. We took the pea vines away for composting and again dug more compost into the soil. We could now see the soil was really coming alive with worms, beetles, slaters and earwigs, and on close inspection, we saw springtails and fine threads of mychorrizal fungi.

The children sowed radishes and beetroot, leaving areas for transplanting out their tomato seedlings which they were raising in the greenhouse. They would enjoy harvesting and eating the tomatoes the following year when school returned.

Six years on and following subsequent green crops, lashings of compost, generous applications of CPP and yearly autumn and spring applications of Prep 500 and also Prep 501, you simply wouldn’t believe the gardens had once been sad, solid compacted carparks. The soil now smells sweet. It is full of life, and the digging is effortless. We have harvested some particularly good broccoli, cabbages, tasty tomatoes, crunchy beans and elegant aubergines over the years. These gardens also support and are supported by thick rosemary hedges now trimmed to 1.2 metres high, three stunning hebes, an Anzac Rose, a volunteer kowhai, a horoeka, Prunus ‘Amanogawa’ and seasonal annual flowers. 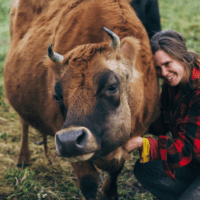 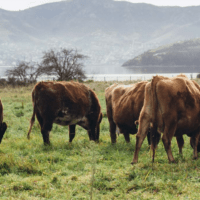