Rachel Pomeroy is a wealth of knowledge on biodynamics in New Zealand. She has travelled extensively, especially in India, sharing her experience of biodynamics, stargazing and planting calendar use. Rachel makes all the biodynamic preparations and is a keen home gardener.

I have a particular farmer in mind when I speak of a “best farmer.” He is Sarvdaman Patel, a lifelong dairy, fodder and vegetable producer in Gujarat, India, who converted to biodynamics in 2000. But what I say could equally apply to several men and women I have met over the years, each of them examples of best biodynamic farmers or gardeners who were previously best conventional farmers or gardeners.

When a best conventional farmer decides to convert to biodynamics, there is very little to teach him; he converts easily and becomes a successful biodynamic farmer within a short time.

So what makes a ‘best-farmer’?

A best-farmer recognises good plant and animal health. He notices early if health is not up to scratch, and takes healing measures immediately. He predicts possible risk situations and does what he can to reduce the risk. He practises good farm hygiene and keeps things in an orderly way; he’s tidy. He knows when a certain crop is happy, that is, it’s “at home” in the area. He notices what crops work well together, growing in close proximity. He practices crop rotation and feels which crop the soil needs next.

When he sees the results, he recognises it when something works well and remembers this for the future. In all his work, he strives for excellence of practice. The best-farmer walks regularly on his land. He notices birds, insects and the different types of weeds, all of whom have chosen to come to his farm, not because he has put them there. Why have they come? What are they trying to balance? He encourages biodiversity on the borders or non-productive areas of the farm. He has a care for his neighbouring farmers, especially considering water resources, border plantings and disposal or recycling of wastes.

As he walks, he notices the feel of the earth beneath his feet and notices the sky and the clouds above him. He notices the weather and the usual weather patterns in his area. He’ll practise water harvesting or improve drainage if required.

Through walking and working on the farm, our best-farmer ensouls the land. He owns it in more than a financial way. A visitor to the farm senses immediately that the farm is loved and cared for. The visitor can relax and enjoy being with the framer who is confident, self-reliant and embraces you with his good humour.

When such a farmer converts to biodynamics, what does he do?

He gets himself well equipped so he can enjoy stirring and applying horn manure, preparation 500, over the farm, four or more times a year. He has a high pressure sprayer to get the fine mist of horn silica spray, preparation 501, onto the crops. He applies the 501 very early in the morning, preferably at the moon-Saturn opposition or during the ascending period of the moon, and possibly following a round of 500 the previous evening, so as to reduce any risk of burning foliage or hastening the maturing process too soon.

He starts and continues compost-making, optimising his use of on-farm materials. He puts the compost preps 502-507 into the heap. He makes cow pat pit, CPP, in pits, in good quantities, to use freely and regularly; “if in doubt, put more out.”

During conversion he’ll make and use good amounts of liquid manures and perhaps vermi-compost, both with biodynamic compost preps put in at the time of making. In addition to the use of CPP, these help to boost plant growth and maintain plant health during the rapid growth phase of the plants. This is especially useful during the conversion period, before the level of stable humus has built up in the soil. This humus will come with use of 500, compost, CPP and digging green manure crops and crop waste into the soil. The use of tree paste will be a big help for the orchardist, especially during conversion but also in an ongoing way.

This farmer already has a feeling for the earth “breathing in” its surroundings and being activated at the time of cultivation. He experiences this during land preparation, seed sowing and interrow weeding or cultivation.

The best-farmer walks regularly on his land.

He notices birds, insects and the different types of weeds, all of whom have chosen to come to his farm, not because he has put them there. Why have they come? What are they trying to balance?

Now he wants to use the planting calendar and choose to do these activities on days which will promote the quality of growth he wants for that crop. During the vortex-stirring of preparations, he can sense that the pulse created in the water is connecting with his own heartbeat as well as the rhythms of the world’s moving waters, and even the surging and receding of the moon in its cycles. He’s probably already a ‘cosmic’ farmer, because he’s noticed the movement of the sun’s rising point along his eastern horizon and the height of the midday sun, and he knows that the seasons of the year are connected with this movement from north to south and back again.

He’s a successful vegetable grower because he has already learnt the varieties to sow at each season of the year,
and the succession required for continuous cropping throughout the year.

When he grows grain crops, he knows that the rustle of the seed heads and the glistening of the light as the breeze passes through the ripe wheat crop is dependent on the crop’s coming to maturity in the heat of the summer sun. An abundant crop with full, hard grains with good storage qualities will be the result. After spraying 501 two weeks before harvest, he experiences how this preparation strengthens these qualities even more.

So, the successful biodynamic farmer needs to be a good farmer. Biodynamics will never fail a good farmer, but it cannot compensate for a farmer who lacks the will or the skill for the task.

Chemical farming, however, allows the less skilled, less caring farmer to still be financially successful. After a couple of generations of chemical farming, the storehouse of humus in the soil is lost; but perhaps the much more significant loss is the loss of will and skill in the farmers. Chemical farming has encouraged a move toward mediocrity in farming practice, and a loss of the wish and the will to strive for excellence of practice.

To take up biodynamics is to take on the task of truly farming.

Making Compost at Schools and Gardens 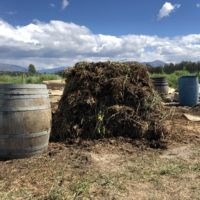 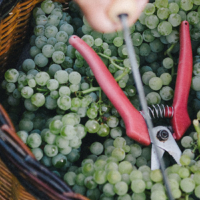 The Human Touch – Biodynamics at Seresin
Scroll to top